Am An Unapologetic American - For Now 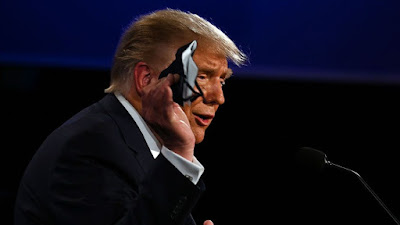 I am an unapologetic American, for now. When my country of birth voted for Trump in 2016, I will admit surprise, but not shock. Democracies don't always get it right, but to fall for the same con twice -the Canadian side of my citizenship would make me apologize for that.
Back in 2016,  the media made it seem that only ignorant, white men would vote Trump. With that level of shame and condescension aimed at disgruntled voters, the results should not be shocking to anyone who claims to understand people.
No one would admit voting for Trump, so the accuracy of any polling was off.  As any teenage parent or high school teacher can attest, shame is an effective motivator, if you want the opposite reaction of what's intended.  Keep telling Americans not to do something with derision and just ask the British how that will go. Still, I am hopeful after now seeing Trump for what he is, Americans  will correct course. Even with a media establishment bias that seems hell bent on repeating the same mistake of 2016.
This is election is personal for me because I know my own mea culpa was being silent four years ago. I am not shy about sharing my political views,  but sadly I sat the last U.S. election out.  I was naïve a and bought into the rhetoric that maybe an outsider would fix Washington.  I ignored the blatant dog whistle campaigning and rationalized that Trump was only doing that to get elected. I hoped he would be an independent minded leader, the U.S. needed once elected. I was wrong  I believe that many Americans who voted for Trump now feel the same.
So am I confident the 45th President's days are numbered.  While some might have needed Trump's handling of the Pandemic to change their minds, my buyer's remorse came early. His immediate tear down of Obamacare, massive tax cuts for the wealthy, unwillingness, to cut ties with his businesses interests, and pressure for lower interest rates (should I go on...) were but a few of the  reasons my view of him went south very quickly.  It was very clear to me that Trump was using the White House to benefit the only Americans he cared about - him and his family. His continued race baiting and being the Russian's useful idiot throughout his four years has only cemented my disgust.
His fans like his unscripted style that mocks conventional norms.  Of course, this is easy to do when you have no principles or annoying morals to guide you.  MAGA's will point to the economy and their wallets to justify their support. But you have to be pretty unprincipled yourself to believe that end justifies his destructive means.
I do find it sad, however, that it looks like a Pandemic was needed for people to see error of their ways.  As much as some people like to assign blame for Covid - the virus doesn't care about your leader's political affiliation. We won't know what was the proper response until the if and when of an effective vaccine are sorted out. Of course the majority don't care what's the reason, as long as he goes.  Apparently, no group holds a monopoly on end justifies the means thinking.
I am not as concerned as .some about Trump refusing to leave office.  I do believe Republicans will finally show a backbone and close ranks on him. Trump's campaign has provided little info on what unfinished business or new promises he would like done.  So Republicans will have little incentive to go against the will of the American people. They will waste no time booting  him out of office knowing they have already milked this cow for all its worth.
In the end, a pandemic trumps all.  Next month, I trust America will get things right and lead again. The result should allow me to remain an unapologetic American. But with how dismissive and morally bankrupt  American politics has become - that's not getting any easier.
Written By Gregory Cawsey
JUSTCAWS

Been certainly enough speculation from concerned parties about what is going to happen in Ontario Schools this fall. Since I have more than a little skin in the game, I wanted to share my thoughts on the matter.  Knowing first hand as an educator and parent the vital role teachers play in the development of young minds I was very satisfied to hear that Sick Kids recommended that school return back to the classroom (with enhanced cleaning and safety measures of course) this fall.  I thought this would be met with relief, and it was for some. But for many it seemed to only bring anxiety. I can understand this feeling of unease coming from some parents, but I thought educators would embrace being relevant and essential again. Teachers know the dark side of abuse and neglect that occurs in homes of the vulnerable. For these students, school is their safe space. We also know that e-learning does not work for many students with special needs and those facing tech inequity. So barring a chang
Read more

When Will This End? Vaccine or Not - Early Next Year

If you are trying to find a sliver lining to this pandemic a popular one is to appreciate its historical significance. You may have been told or said to others to think of the stories you can tell your grandkids about the pandemic of 2020.  Sadly, it will be a sombre tale. But it will be one that I am glad to proclaim will come to an end after one year.  Yes, the pandemic will stop as soon as we decide to put an end to the pain and suffering caused. Of course I am not talking about the disease. Sorry, but that's not coming to end just yet. The response to it, however, will.  Pandemic fatigue has already set in and although many including myself have resigned themselves to writing off 2020, the novelty of these unprecedented times is beginning to wear thin. Friends who only dared go out for essentials back in the spring - were out and about this past summer and continue do so where allowed.  With each cancelled event, celebration postponement or business lost impatience grow
Read more